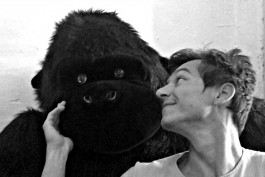 Walter Ego grew up in a very small provincal village of Austria close to the danube. He enjoyed being taught catholic and proletarian ideas mixed with rough farmers habits. He escaped to the city of Vienna when he was older. Later he started to study art at the department of PsychoConceptualArtPractices because he had no permission for other universities. He finished some years ago. Never won a price, nor got any stipendia or fellowship, neither did a residency.
He has never been ouside of Europe nor could he refer to longer residencies in other countries. That he has no gallery must probably not be mentioned. He is doing therapy now. A fortuneteller is currently telling him that he thinks too much. Occasionally he appears in public but he prefers to disappear and wander in emptiness lost in time without time.
Walter Ego is many: Petz, Prof. Haselmayer, Papa, Pedrito, Peter Haselmayer, Petrus, ...